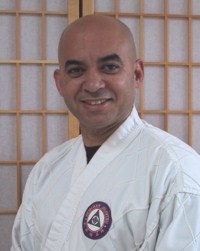 In 1968 he studied Kyokushinkai Karate-Do. From 1969 to 1975 he studied Okinawan Kempo Karate-do under David Martinez and Narciso Bultron Sensei in Puerto Rico. In 1975 he moved to Fort Bragg, North Carolina and continued his karate training under Owen McDonald Sensei until 1982, achieving the ranks of Shodan and Nidan in Okinawan Kenpo Karate-Do. In 1985, he began his studies of Shorinji-ryu Renshinkan Karate-Do under Adalberto Rosario Sensei in Puerto Rico.

He has continuously studied Aikido since 1980. His training began at the Aikido of Monterey Dojo under Tom Gambell Sensei, Dennis Evans and Danielle Smith Sensei. In 1981 he traveled to Iwama, Japan and studied directly under Morihiro Saito Sensei. Under the instructors of the Aikido of Monterey dojo he was promoted to Shodan in June,1982 and to Nidan in May 1984. Toribio became a direct student of Frank Doran Sensei in 1986. In May 1987 he achieved the rank of Sandan in Aikido through Danielle Smith and Frank Doran Sensei. He returned to Iwama, Japan in 1989 as uchideshi under Saito Sensei. Morihiro Saito Sensei is 9th dan and was a direct student of Morihei Ueshiba O’Sensei, founder of Aikido. In 1992 Toribio was promoted to Yondan, 4th degree black belt, and in 1999 he was promoted to Godan, 5th degree black belt, under Frank Doran Shihan who is a 7th degree black belt and chief instructor of the Aikido West Dojo in Redwood City, California. Toribio Sensei is one of the Aikido instructors of the California Aikido Association, Division 2, under the supervision of Frank Doran Shihan.

He began his studies of Hakko-ryu Jujutsu in 1981 under Brian Workman Shihan, receiving his Shodan in January 1983, Nidan in March 1984, Sandan in August 1986, and Yondan in July 1988. The following year, he traveled to Japan for two months, where he studied Hakko-ryu Jujutsu and Koho Shiatsu under the 2nd grandmaster Ryuho Okuyama, senior instructor Yasuhiro Irie Sensei and other senior instructors at the Hakko-ryu Honbu Dojo. In September 1989, he received the title of Menkyo Shihan (licensed Master Instructor.) In addition, he received certification in Koho Shiatsu (Finger Pressure Healing Therapy.) In September 1991 he returned to Japan for three months. During that time he successfully completed the Kaiden training and achieved Menkyo Kaiden Shihan. Later, he underwent the seventh and highest level of training in Hakko-ryu Jujutsu and received the title of Menkyo Kaiden Shihan Sandaikichu. In 1991 Toribio Shihan became the fourth Hakko-ryu teacher with this title in the United States.

Currently he is studying Bujinkan Budo Taijutsu/Ninjutsu directly from the 34th Grandmaster Masaaki Hatsumi-Soke of Togakure-ryu Ninjutsu. In 1988, Toribio began his training in Bujinkan Budo Taijutsu under Richard Van Donk. After his Nidan level he became a direct student of Hatsumi-Soke. Hatsumi Sensei took him through the black belt levels, and in 1999, Toribio achieved the Shihan level, 10th degree black belt. On December 2, 2005 Toribio Shihan received the 15th dan, the highest level possible in Bujinkan Budo Taijutsu from Masaaki Hatsumi-Soke. He continues to travel, train and maintain a close relationship with Hatsumi Sensei and his senior shihan in Japan.

In 1985, he began his studies of Iaido under Kazuo Chiba Sensei in Berkeley, California. In 1990 Toribio Sensei traveled to Japan and met Machida Kenshinsai Kancho, the Soke of Enshin Itto-ryu Battojutsu system and was accepted as a direct student (jikideshi.) In November 1993 he was promoted to Shodan and in May 1995 to Nidan. In April 1996 he was tested and promoted to Sandan and in November the same year he was again tested and subsequently promoted to Yondan in Enshin Itto-ryu Battojutsu. Toribio achieved the rank of Godan in 1997, Rokudan in 1998, Nanadan in 2000, Hachidan in 2003, Kudan in 2006 and Menkyo Kaiden (Judan), the highest level possible in 2008. He continues traveling and studying Enshin Itto Ryu Battojutsu with Machida Kenshinsai-Soke in Japan, and teaching Enshin Itto Ryu Battojutsu at the Monterey Budokan in California.

Your cart is empty